Jesus, The Son of God 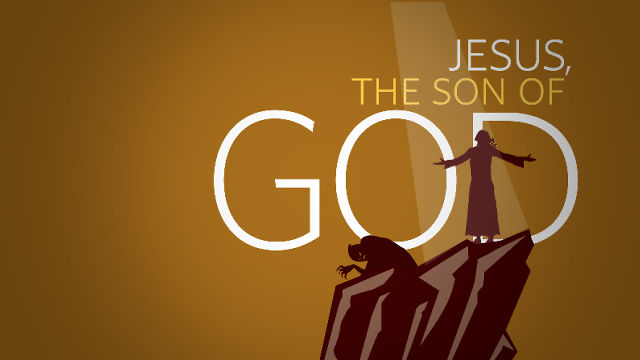 When Jesus was born in Bethlehem, Father God sent an angel and said, “To you is born this day a Saviour, who is the Messiah, the Lord” (Luke 2:8-11). When Jesus was baptized in the Jordan River, Heavenly Father said to him, “You are my Son, the Beloved; with you I am well pleased” (Luke 3:22). When Jesus breathed his last on the cross, the earth shook and the rocks were split and the centurion and those with him said, “Truly, this man was the Son of God!” (Matthew 27:50-54). I have been preaching on the eleven Christian doctrines, which C. S. Lewis found “common to nearly all Christians at all times.” Today I am going to talk about “Jesus, the God of God.”

Of course, if you understand religion as a system of beliefs that teaches us ethics, then you may say all religions are the same. But I think, most religions are not happy to be understood simply as a provider of ethical teachings. Each religion offers its own worldview, actually, that helps people see the world, the community, and individuals, and it claims itself to be the truth. Once that it came into the Arena of Truth, there is no neutral corner for them. It has to go through a thorough process of examination which produces only two results: One is “You are true” and the other is “You are false.” The examining process has not finished yet. And that is not a human task. Only when Jesus comes again as the Judge for the Last Judgment, we will see and know, for sure, what is true.

For now, we believe it is true that God sent His only Son to the world to save us from our sins and that everyone who believes in Him will not perish but have eternal life (John 3:16). All religion founders such as Buddha, Confucius, and Mohamed are human. Any one of them is never claimed to be the Son of God. Of course, in Buddhism there is no concept of God at all. Only Jesus is claimed the Son of God. And the passages, which I began the sermon with, proclaim that Jesus is the Son of God. And Jesus himself said, “I am the Way, the Truth and the Life,” and also said, I and Father in heaven are one.

The claim that Jesus is the Son of God is supported by the story of Jesus’ virgin birth. Mary was conceived by the Holy Spirit and Jesus was born. Some of you may wonder how a virgin could give a birth to a son without any relationship with a man. As for me, the question sounds identical with another question: How come the world could be made out of nothing? My answer is: If God had not been able to make a virgin to give a birth, I would not have believed in God. If God had not been able to make the world out of nothing, I would not have found any point to believe in God.

Thirteen years ago, when I was on Ministry Formation, I preached about the virgin birth of Jesus. Immediately after the service, while I was exchanging greetings with people who were going out of the church, the professor who as Director took charge of the ministry formation course came to me and criticized me—rebuked me, actually—saying “You tried to impose your idea on the congregation.” I responded, “No, I didn’t. I just tried to share what the Bible is talking about.” She did not accept the doctrine that “Jesus is the Son of God.” Of course, she thought the story of virgin birth was not true, and Jesus’ resurrection, either. She argued that Jesus’ disciples wrote that “Jesus is the Son of God” just as many rulers in history were assumed the title such as “son of God” or “son of Heaven.” I was surprised at the fact that a minister and theologian did not believe in Jesus who is the Son of God, and all the more that a theologian who took charge of the ministry formation course did not believe Jesus’ virgin birth and his resurrection. You may understand how difficult and stressful I was through the course. Some years later when I was ordained at Palmerston North, I came across another lecturer who said to me, “Oh, you survived!” I had argued with him about Christian doctrines because he had supported the Director’s liberal perspective in theology. I just smiled at him. I had nothing to say.

I believe, God sent His only Son to the world to save all of us. He is Jesus, “the Messiah, the Son of the living God.” Here a question comes up in my mind: Why did God send His only Son to the world? I mean, was His spoken words not enough? He is God Almighty. If He wills it, it will be done. He created everything only with His words. Then, why did not he use His words again, but come down to the earth and suffer? What is your thought?

Why did God send His only Son to the world?

If someone ask me why God did not use His spoken words to save us but came Himself to the world and suffered, I would remind the person of two theological points: The one is Incarnation and the other is agape.

One day when Jesus said, “I am the way, and the truth, and the life. No one comes to the Father except through me” (John 14:6), Philip said to Jesus, “Lord, show us the Father, and we will be satisfied” (John 14:8). Then Jesus said to him, “Have I been with you all this time, Philip, and you still do not know me? Whoever has seen me has seen the Father” (John 14:9).

God is not an abstract idea, an arbitrary speculation, or a vague concept, but God is real. Now how do you think we know that God is real? If God had not come to the world in a human form, wouldn’t we have argued over the question “Is God real?” Philip’s question was: “I am wondering if God is real.” What Jesus said to him was “God is as real as I am that you have seen.” God was able to have everything fulfilled only with His word. Nevertheless, He personally came to the world, which we call Incarnation, for the sake of our understanding. God wanted Himself to be understood not ideal and abstract but real and present.

God is love (1 John 4:10), and His love was proved in Jesus’ death for us. “God proves his love for us in that while we still were sinners Christ died for us” (Romans 5:8). And Philippians 2 talks about God’s self-sacrificing love while encouraging us to imitate Christ’s humility: “Let the same mind be in you that was in Christ Jesus, who, though he was in the form of God, did not regard equality with God as something to be exploited, but emptied himself, taking the form of a slave, being born in human likeness. And being found in human form, he humbled himself and became obedient to the point of death—even death on a cross” (Philippians 2:5-8).
Jesus was in the Second Person in Trinity and yet did not regard equality with God. And He became obedient to the point of death, even death on a cross, which means Jesus was God but He left behind the glory in heaven and came to the world to die to save us all.

Dietrich Bonhoeffer writes the book Discipleship. The original German title of the book was Nachfolge, of which the literal meaning is “Follow.” In this book, he writes, “When Christ calls a man [or a woman], he bids come and die.” Just as he wrote, Dietrich Bonhoeffer followed Jesus to the point of death. From time to time we are assured of our safety and prosperity with this passage from Romans 8: “If God is for us, who is against us? He who did not withhold his own Son, but gave him up for all of us, will he not with him also give us everything else? … Who will separate us from the love of Christ?” (Romans 8:31-32, 35).

As we are assured of the love of Christ, from which nothing can separate us, we need to remember what also draw our attention in the same paragraph: “Christ who died, and was raised.” It talks about Jesus’ death and resurrection. An important point is its sequence. Death comes first, and resurrection follows. Our conviction does not come from not-dying but from being-raised from the dead. So, Dietrich Bonhoeffer boldly says, “When Christ calls a man [or a woman], he bids come and die.” Dietrich Bonhoeffer was convinced that: For those who are obedient to the call, the world is not worthy of them (Heb. 11:38) because they are already determined to follow Him even to the point of death. The bold message from Romans 8, “If God is for us, who is against us?” is only for those who have responded to the call with gratitude.

Let us pray: Christ Jesus, we hear your voice again “Follow me.” Now we pause for a moment and think about the meaning of following You. We question ourselves “Can we?” because we know that you carried the cross up to the Hill of Golgotha. Now we are reminded again that only those who are committed to your call are able to share your glory, glory of being raised. Give us faith each day to follow you, even to the point of death, so that we may live our daily lives with courage and boldness, saying, “If God is for us, who is against us?” In your name we pray. Amen.