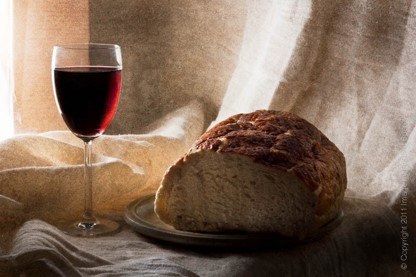 Jesus took bread, gave thanks and broke it, and gave it to them, saying, “This is my body given for you; do this in remembrance of me.”
20 In the same way, after the supper he took the cup, saying, “This cup is the new covenant in my blood, which is poured out for you.
1. Jesus took bread
2. Gave thanks
3. Broke it and gave it to them
4. In the same way he took the cup
Here we are introduced not only to Jesus’ actions, but also to what He is requiring from us:
“Do THIS in remembrance of me.” (Luke 22:19)
This is repeated a number of times through the Bible.
Mark 14: 22-25.
1 Corinthians 11:23-25
What is Jesus wanting us to remember him for?
and
Why has He chosen the bread and wine as the items by which we are to remember him by?
Jesus wants us to remember him not by His earthly bodily image, but His spiritual identity and his ministry.
Jesus uses bread and wine as symbols describing the nature of his ministry and to highlight key points in His teaching

Jesus’ identity:
Bread plays an important symbolic role throughout the Bible going back to the days of Moses and the Israelites in the desert. Jesus uses the story of the Manna (a type of bread) in the desert saying:
“Very truly I tell you, it is not Moses who has given you the bread from heaven, but it is my Father who gives you the true bread from heaven.
For the bread of God is the bread that comes down from heaven and gives life to the world.” “Sir,” they said, “always give us this bread. “Then Jesus declared, “I am the bread of life. Whoever comes to me will never go hungry, and whoever believes in me will never be thirsty. (John 6:31-35)

Jesus’ ministry:
The bread and the wine combination are used symbolically to describe the nature of Jesus’ ministry.
The bread is staple food, something that was included in the menu of even the poor. It is a simple, humble food, which was available to all including the simple fishermen the farm workers, and the poor.
Jesus wants us to remember him for the nature of his ministry, a ministry of:
1. Simplicity –bread- simple food accessible to all people including the simple workers and the poor
2. Humility –bread staple humble food, which is used in numerous stories of the bible beginning with the Manna in the dessert through to the feeding of the five thousands with 5 loaves of barley and two fishes

In the Jewish tradition bread and wine are used in the thanksgiving ceremony performed each week as part of the festive meal of welcoming the Sabbath, and all other holidays. During the ceremony, the bread is broken and distributed, and a cup of wine is shared among those seated at the table. Thanksgiving to God is said for the bread He has provided as food from the land, and wine as fruit from the vine.

Jesus teachings:
In choosing the bread and wine thanks- giving ceremony, Jesus expresses two major teachings:
1) By choosing a well-established tradition of a frequently celebrated thanksgiving ceremony, Jesus ensures a regular reminder of the message He gave to the disciples during the last supper on the night before he died, and that is, to remember Him, remember His ministry.
2) Embedding His teaching within a thanksgiving ceremony signals the importance Jesus assigns to being thankful to God.