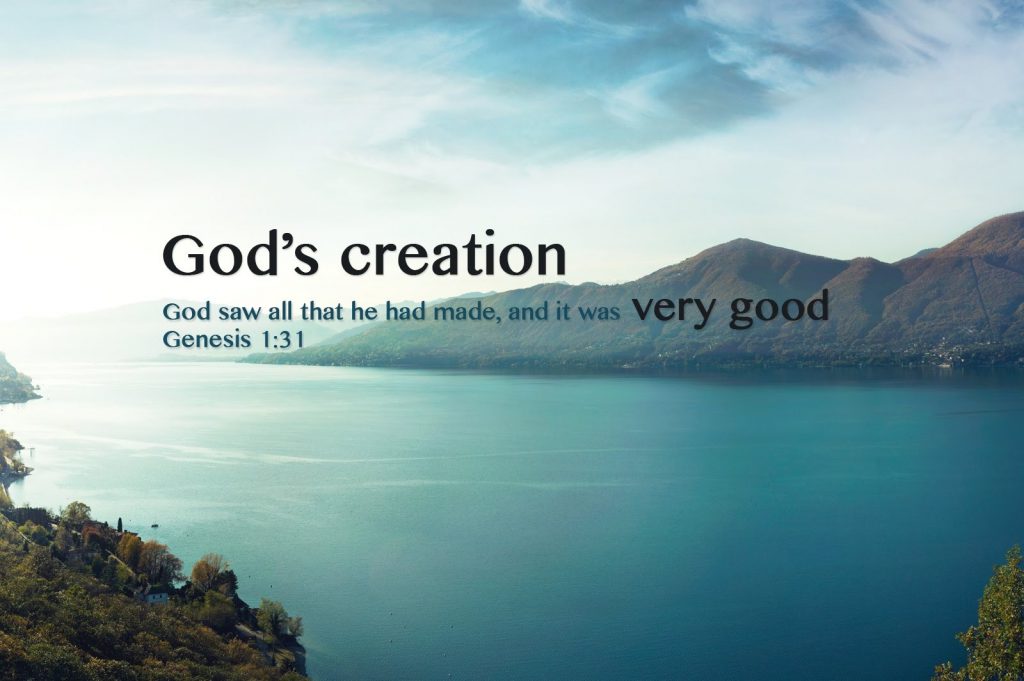 In my high school days, I had a friend who claimed himself to be an atheist. One day when we had an outdoor class, we had a serious talk with each other over creation and evolution. He argued for evolution and I as a Christian for creation. Both of us spent hours arguing for our own positions only to fail in reaching any agreement. I was deeply disappointed because I failed to help my friend understand God’s creation. I haven’t engaged in any serious discussion over the same issue since then, because I found the creation-evolution argument always ends with no fruit.

Instead, I have collected, researched and studied the resources about creation and evolution for the last forty years, not because I wanted to strengthen and sharpen the points of my argument, but because I wanted to review and question the divine creation critically. I seriously asked myself, “Is God’s creation true?” My conclusion was and is: God’s creation is true for me and I believe in God of Creation. Along with my journey of faith for the last forty years or so, I have another conclusion that a Christian life of loving, caring and doing kindness is more powerful than watertight argument.

When it comes to faith, I believe, we should apply logical thinking and reasoning skills to our faith issues. Otherwise, it will end up with blind faith. Self-awareness, self-examination and self-reflection along with critical thinking need to be part of our faith journey, not once in the beginning of the journey but all the way through until we see Jesus face to face in Heaven. So, let me ask you if it is true or false: “Creation is provable.” Is it true or false? Now let me make a slight change to the question for more clarity: “Is the creation of mass provable?” and “Is the creation of life provable?” What is your answer to these questions? Here is my conclusion after many years of review, examination, and reflection.

Is the creation of mass provable? I would say yes. It is possible to prove the creation of mass. The existence of mass proves itself to be created, which is based on scientific truth of The Law of Conservation of Mass: “The scientific principle that in any closed system subjected to no external forces, the mass is constant irrespective of its changes in form; [which means] matter cannot be created or destroyed.”

If one of my friends challenges me by saying, “Wasn’t there any other alternative way for matter’s existence than creation?” I would say to him, “I do not know, and nobody knows it. But I won’t give a second thought to my current belief until you bring me any evidence of the alternative way you are talking about.” I don’t think, my friend will be successful in finding any evidence for that, because he is talking about what he does not know. The things that we see and touch prove themselves having been created because matter never comes from nothing. Now I am talking about science.

“Science is still unable to put forward any satisfactory explanation as to how life arose in the first place. We must either accept the Bible doctrine that God created life, or go on making improbable speculations” (Bernard Ramm, The Christian View Of Science And Scripture).

“Life does not come from non-life. This is a scientific fact. There is a big difference between a dead cell and a living one, or a dead body and a living person. Life did not come from “non-life” but rather from the Giver of Life.” (Don Stewart, An American writer and speaker)

Our life proves itself having been created because “life only comes from life.” Now I am talking about science.

Let us look at some verses in the Bible which speak about God of Creation.

“In the beginning you laid the foundations of the earth, and the heavens are the work of your hands” (Psalm 102:25).

“The heavens declare the glory of God, and the sky above proclaims his handiwork” (Psalm 19:1).

“Who has measured the waters in the hollow of his hand and marked off the heavens with a span, enclosed the dust of the earth in a measure and weighed the mountains in scales and the hills in a balance” (Isaiah 40:12).

“Thus says God the LORD, he that created the heavens, and stretched them out; he that spread forth the earth, and that which comes out of it; he that gives breath unto the people upon it, and spirit to them that walk therein” (Isaiah 42:5).

“Can you bind the chains of the Pleiades? Can you loosen Orion’s belt? Can you bring forth the constellations in their seasons?” (Job 38:31-32a).

“I look at your heavens, the work of your fingers, the moon and the stars, which you have set in place”(Psalm 8:3).

“By faith we understand that the universe was created by the word of God, so that what is seen was not made out of things that are visible”(Hebrews 11:3).

“God created the heavens and the earth” (Genesis 1:1).

The first paragraph of Genesis, the first book of the Bible, speaks about the creation of the universe, which is not only the beginning of the bible but also a starting point of our faith in God, who was able to create the heavens and the earth. So, we may say, the first statement of the Bible is not only describing what happened in the beginning but also declaring who God is. It means, our Christian faith is closely related to the doctrine of God of Creation, which one of the eleven Christian doctrines that C. S. Lewis suggested to be “common to nearly all Christians at all times.”

God who sings for Joy

God, who is love (1 John 4:10) and who created each one of us in His image (Genesis 1:27), says: “But now thus says the LORD, he who created you, O Jacob, he who formed you, O Israel: Do not fear, for I have redeemed you; I have called you by name, you are mine”(Isaiah 43:1). “Because you are precious in my sight, and honoured, and I love you”(Isaiah 43:4). “Bring my sons from far away and my daughters from the end of the earth—everyone who is called by my name, whom I created for my glory, whom I formed and made”(Isaiah 43:6-7).

The psalmist sings, “I praise you, for I am fearfully and wonderfully made. Wonderful are your works; that I know very well”(Psalm 139:14). And Zephaniah prophecies that it is God who sings for joy over us, “The LORD, your God, is in your midst, a warrior who gives victory; he will rejoice over you with gladness, he will renew you in his love; he will exult over you with loud singing as on a day of festival”(Zephaniah 3:17).

“I created you for my glory” (Isaiah 43:7), “You are mine” (Isaiah 43:1), “You are precious in my sight, and honoured, and I love you” (Isaiah 43:4), “I rejoice you in my love, I renew you in my love, I exult over you with loud singing” (Zephaniah 3:17), “You are wonderfully designed and beautifully made” (Psalm 139:14), says Creator God. Now we know that we are here not by accident, but by the wonderful plan that God had in mind, that we were all designed to love each other, but the Fall brought us a serious distortion in the way we love, and that Jesus, the Son of God, came to the earth to reveal the love of God and teach us how to love one another.

Westminster Shorter Catechism Question #1 asks: What is the chief end of man[or woman]? The answer is: Man’s [or woman’s] chief end is to glorify God, and to enjoy him forever. When it comes to the term “glorify God”, the following verses can be referred:

“Whether therefore you eat, or drink, or whatsoever you do, do all to the glory of God”(1 Corinthians 10:31), “For of him, and through him, and to him, are all things: to whom be glory for ever. Amen” (Romans 11:36). “You shalt guide me with thy counsel, and afterward receive me to glory. Whom have I in heaven but You? and there is none upon earth that I desire beside You. My flesh and my heart failed: but God is the strength of my heart, and my portion for ever”(Psalm 73:24-26). “And the glory which You gave me I have given them; that they may be one, even as we are one… Father, I will that they also, whom You have given me, be with me where I am; that they may behold my glory, which You have given me: for You loved me before the foundation of the world”(John 17:22, 24).

Let us pray: God of Creation, thank you for your creation which was beautifully done. And thank you for each one of us, who was wonderfully created. What a blessing it is that life did not happen to be by accident, but it came from you who is the Source of Life. What a blessing it is that we are here not by accident, but by your thoughtful and graceful design. As we are wondering what is the purpose of our being here on earth, we hear you whisper in our ears: “Love, the Lord your God, with all your heart, and with all your soul, and with all your mind, and with all your strength,” “Love your neighbour,” and “Love one another.” Continue to give us strength to love you, our neighbour, and each another more deeply. In Jesus’ name we pray. Amen.