A Place For You 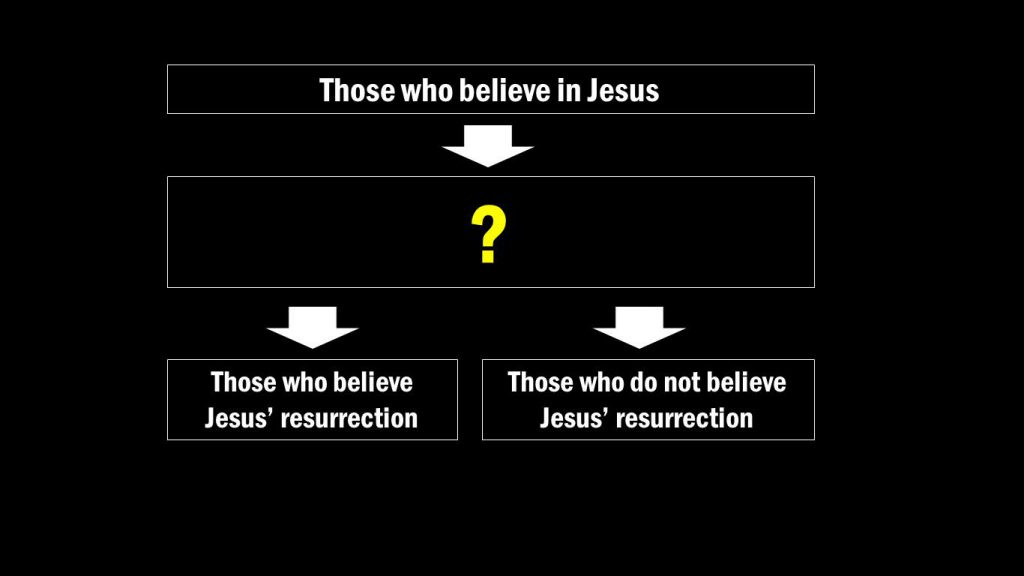 Last Sunday I said to children that “I believe Jesus’ resurrection because God is so great that He was able to create Sun, Moon, all the stars, the earth, all the animals, and Adam and Eve. He was able to bring Jesus back to life.” That is right. Jesus has risen. Father God raised Him from the dead, what is called resurrection. No one in the world has risen from the dead. It was possible only because Father God—God of Life—brought Him back to life. No one else has done that, and no one else is able to do that.
This is one of basic Christian beliefs, which means, those who call themselves Christian are required to believe. However, all those who call themselves Christian do not believe Jesus’ resurrection as a historical event. So Christians can divide into two groups: (1) Those who believe Jesus’ resurrection, who take it as a historical event, like me, and (2) those who do not believe Jesus’ resurrection, those who publicly refuse
to believe it, like Lloyd Geering; or those who do not believe it yet.
At this, a mathematical diagram flashed in my mind. No wonder, mathematics was my favourite. We are Christians, who believe in Christ Jesus. We walk into this box, which is a system of belief. Then, it is interestingly that there are two kinds of outcome: There are two groups of people: Those who believe Jesus’ resurrection, and those who do not.
My question is: Why is the result not the same? What is happening inside the box? Why does the box produce two different outcomes, while the input is only one kind—those who believe in Jesus? Now I invite you to walk with me into the box to see what is happening there.
Once that we walk into the box, we meet Jesus who says to us: “In my Father’s house there are many dwelling-places. I go and prepare a place for you” (John 14:2-3), which means, death is not the end, we have life beyond death. This is what all the books in the Bible affirm:
There is life beyond death, and we will be with Jesus even after death.
Therefore, for those who believes in Jesus and believe his resurrection, John 14:3 sounds like this: “I will die before you, and surely will come back to life from the dead, and go up to Heaven where Father God is, and there I will be waiting for you.” How good it is! This is a promise that: We will live in the Kingdom of peace, joy and love forever.
On the other hand, for those who believe in Jesus but do not believe his resurrection, John 14:3 sounds like this: “I will die before you. I will be preparing your place there, and waiting for you.” How scary it sounds! Because they do not know where that is. It must be a place of death, a place of darkness, or a place of nothing because they do not believe resurrection—Jesus’ resurrection. I don’t think, it is desirable place for us. I don’t think it is a good place for us to be.
Furthermore, Jesus said, he was going to be at Father’s house. Father’s house shouldn’t be a place of darkness. It shouldn’t be a place of
death, or a place of nothing. Therefore, my conclusion is this:
If we believe in Jesus and believe what the Bible says about (1) life beyond death and (2) a place that Jesus has prepared for us, we would better believe in Jesus’ resurrection because it is more logical, rational, integral, persuasive and acceptable in terms of the Christian belief system and because it is more promising, positive, and desirable in terms of our future reality.
So I hope all of us may believe in Jesus Christ who has risen from the dead, which took place in history.

Peace be with You

If there is someone still wants to keep oneself from the belief of Jesus’ resurrection, they cannot avoid a sense of insecurity, anxiety, confusion and fear. This is not my judgment, but what the Bible witnesses. The disciples saw Jesus, their leader, arrested and crucified. No wonder, they became hopeless, fell into despair, and felt fearful until they met the resurrected Jesus.
Today’s readings from John 20, however, witnesses how radically the disciples changed.
“When it was evening on that day, the first day of the week, and the doors of the house where the disciples had met were locked for fear of the Jews, Jesus came and stood among them and said, ‘Peace be with you.’” “After he said this, he showed them his hands and his side. Then the disciples rejoiced when they saw the Lord. Jesus said to them again, ‘Peace be with you.’”
The Bible witnesses how the disciples enjoyed their life of peace. It doesn’t mean that they did not have any trouble or difficulty but they were able to find peace in whatever circumstances. A sense of peacefulness, calmness, stillness, security, tranquillity, and quietness is the first prominent aspect of the change that the disciples experienced when they met the resurrected Jesus.
The same sense of peacefulness and stillness is given to those who believe Jesus’ resurrection. Do you enjoy such a blessing at the moment? Then, congratulations! And, thanks be to God.

Acts 4, one of the readings for today also witnesses how radically the disciples changed. The chapter talks about a story that Pater and John was caught and brought the Jewish Council. his was the very Council that had put Jesus, their teacher, to death. Did Peter and John tremble before the Council? No. they didn’t at all. Rather, they dared to challenge the Jewish leaders, by saying: “You must judge whether it is right in
God’s sight to listen to you rather than to God” (Acts 4:19).
They risked their lives as they witnessed to who Jesus was and what He had done: They quoted Psalm 118:22 which the Jewish leaders knew very well.
“The stone that was rejected by you, the builders; it has become the cornerstone.”
By saying this, Peter and John was nearly sentenced to death. How come they could be so courageous? They had been nervous, anxious and fearful until they met the resurrected Jesus. A sense of courage, boldness, confidence, braveness, audacity, and fearlessness is the second prominent aspect of the change that the disciples experienced when they met the resurrected Jesus.
The same sense of courage, fearlessness and confidence is given to those who believe Jesus’ resurrection. Do you enjoy such a blessing at the moment? Then, congratulations! And, thanks be to God.

A gift for those who believe in Jesus

Those who do not believe Jesus’ resurrection may be able to have and enjoy a certain degree of peacefulness and fearlessness. But I am sure, that is different from the joy, peace, and love that we have, which are promised and given by God to those who believe in the resurrected Jesus. Those who do not believe Jesus’ resurrection have to make themselves convinced of peace and joy. That is a kind of self-conviction, which they practice in a way of self-comfort.
Jesus said, “I go and prepare a place for you” (John 14:2-3). I hope not, what Jesus is promising you is not, at best, an unknown place—and, at worst, a place of darkness or nothing—but a place of never-ending joy, ever-overflowing peace, and steadfast love.
I hope and pray that: All of us may enjoy a life of peacefulness, joyfulness, boldness and fearlessness, which comes from God as a gift for those who believe in Jesus who has risen.
Readings: John 20:19-31; Acts 4:1-22. “A Place for You”. 2nd Sunday of Easter 23 Apr 2017. Rev Joohong Kim. Crossway Community Church.